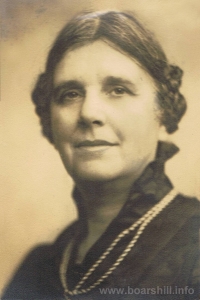 She married Wilton Edwin Rix who was a Congregational Church minister in Benson and Ealing.  They had five children and moved to Boars Hill in 1939 although Mary had been born in Oxford.  She died in 1960.

On May Day 1941 Mary Bright Rix wrote some short articles on the history of Boars Hill.  These were published shortly afterwards and dedicated to her parents.  The link below will take you to a scan of the original booklet which represents a significant historical record of past life on Boars Hill.

Part One is titled “Boars Hill Half-a-Century Ago”. Bear in mind that half a century before 1941 means this is an account of life on the Hill in the 1890s!

Part Two is titled “Recollections of Boars Hill“.  In this part Mary Bright Rix looks at various historical aspects of life on the Hill going back to the late 18th century.